Rehoused the bees – moved them out of the 5-frame catch-box they’ve been living in since who-knows-when, and into their spiffy new full-size brood-box.

It went messily. Despite my inexperience and clumsiness, they moved in quite well and by midday were already calming down. I removed their old house in the evening and the guard-bees were moving in a much more normal fashion after their day on High Alert, though there were quite a few more of them than normal. To be expected. A couple of days left to themselves should see them right, I have no doubt.

I did not get a good look at the wax – a couple of the frames were thoroughly glued together and I was more concerned with moving them as quickly and smoothly as possible than with a thorough hive inspection. In a week or four I’ll take a closer look at their situation — see how much of the new frames they’re using and consider how soon we can start replacing the old frames. The wax on them is very old and black, and very, very uneven due to the upside downs and travails the swarm has endured. 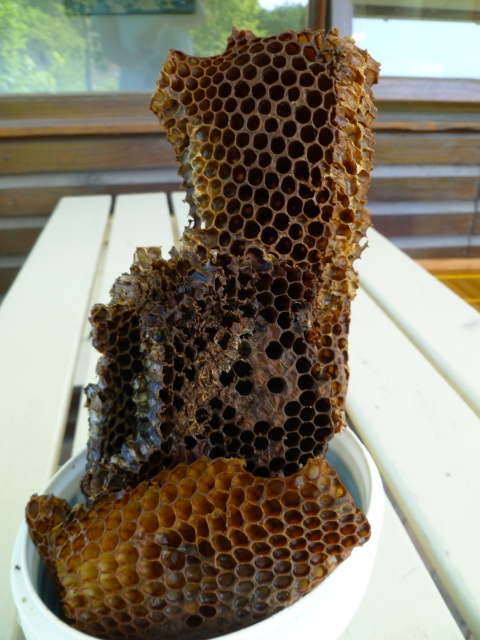 Working with the swarm was somehow a therapy for me. There were some stressful moments, like when I ran out of smoke, and when a large cluster of Bees stayed firm on the old box and gave signs of getting together to bugger off rather than join their queen in the new box. Despite those, I enjoyed the whole experience. I found it curiously calming and rather peaceful. Sounds like a contradiction, doesn’t it? Calming, yet nervous and clumsy, therapeutic, yet stressful… things are never simple, are they?

A few of the Bees came to investigate me quite closely. They didn’t seem to view me as a threat – just curious, and I felt them to be quite friendly. The whole thing gave me a very positive (and much needed) uplift.

Today I shall go and take a look at how they’re settling in. Really there’s not much I can do if they decide to move off, but I don’t honestly think it likely. They seem really quite settled and happy with the neighbourhood. It’s just after all the lost swarms over the years that I keep in mind that anything’s possible as a guard against possible disappointment. Looking back at the old blog I am suddenly confronted with the fact that it took ten years before I managed to attract a swarm to stay. They’re quite precious to me.